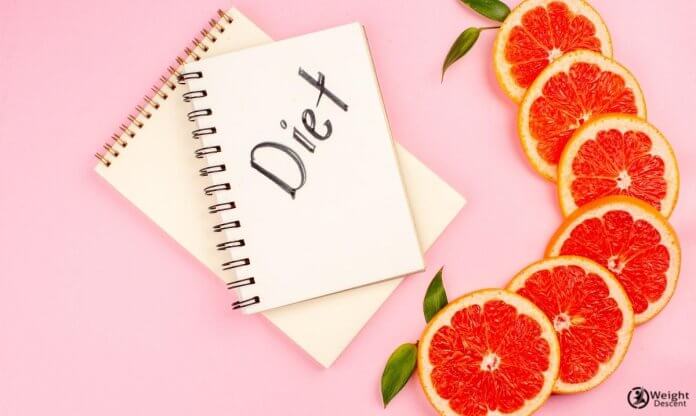 Of all the fad diets, the grapefruit diet has outlasted almost each of them. The diet has been around 1930 and people seem to embrace it at some point in their life. It is believed by many that grapefruit contains certain enzymes that might help burn fat when eaten before meals.

The grapefruit diet has several variations and lasts for about 10 to 12 days. It claims to help you reduce about 10 pounds. Significant weight loss within a short time is what the grapefruit diet promises. So, does that work? And, is it worth trying? Let’s find out.

What exactly is the grapefruit diet?

The very concept of the grapefruit diet is about consuming grapefruit whenever you are having meals. And, you have to do that continuously for about 3 weeks. Most variations of this diet plan have certain limitations over your food choices and calorie intake.

The idea is that grapefruit aids in burning a lot of fats and that way it helps to achieve the goal of losing weight significantly. People following this diet plan are allowed to have 3 or 4 meals per day. The diet contains grapefruit and other high-protein food such as skim milk, meat, eggs, or bacon.

Even some versions of the diet allow people to consume coffee, tomato juice, and salad. While other versions might allow you to eat whole-wheat muffins, fish, cottage cheese, low-fat cheese, Greek yogurt, or strawberries.

Apart from that, some versions restrict carbs and allow eating food with high-fat content. Others try to keep the calories as low as between 800 and 1000 a day. While there are no fixed rules about the type of grapefruit diet you can take, it is a matter of choice which version should be the right one for you.

Is it possible to lose weight when you are on a grapefruit diet?

Because grapefruit contains certain enzymes that help in burning fat, many people believe that the grapefruit diet will help to lose weight. Also, they believe that anyone can lose up to 10 pounds in about 10 to 12 days. However, these claims aren’t backed by scientific evidence.

In reality, grapefruit or other kinds of citrus fruit don’t burn belly fat or other types of fat. Somehow, if you notice a weight reduction, it is because of other reasons. As of now, there are no studies that say anything about the health benefits of having a grapefruit diet.

Moreover, there is no connection found between consuming grapefruit and the risk of having overweight. While some studies suggest that grapefruit might help facilitate weight loss, none of them mentioned about grapefruit diet. And, most of the studies were conducted on animals or a very small group of people.

However, it is worthy to point out that grapefruit is rich in fiber and provides about 2.5 grams per half. That way, it can help with weight loss. In several studies, it has been proved that eating more fiber can help you lose weight easier, especially for those who find it hard to follow traditional diets.

Grapefruit fits right into any diet form because it is the only citrus fruit that gives you only 53 calories (half of a large grapefruit) per serving. On top of that, it consists of 88% water that helps to suppress appetite and always keeps you hydrated.

As mentioned earlier, grapefruit has lots of dietary fiber that doesn’t make you hungry and helps in preventing overheating as well. The fiber present in grapefruit promotes satiety and makes your digestive system work smoothly with troubles.

Moreover, unlike other carbs, grapefruit doesn’t increase your blood sugar levels. This is the reason why higher fiber content can be a linked to reduced risk of type II diabetes. Also, there might be reduced risks from colorectal cancer, elevated cholesterol, and heart disease.

Grapefruit is filled with the goodness of antioxidants, minerals, and vitamins. Eating grapefruits has been associated with higher nutrient intake. Women who frequently consumed this fruit or its juice have higher amounts of fiber, beta-carotene, magnesium, potassium, and vitamin C.

The levels of triglycerides are found to be lower in them and the percentage of good cholesterol levels are higher as well. Apart from that, women had a smaller waist and weighed less. Consuming grapefruit reduces C-reactive protein, which is the marker of inflammation.

Restricting calories severely and putting down on other food groups are bad indicators of a fad diet that cannot be considered a health plan when it is about weight loss regime for the long term. There is no denying that fad diets provide temporary results.

Because of that, there might be issues with water and muscle loss. And, not fat loss. It is often seen that many people who followed this diet gained the lost weight back when they returned to their normal eating patterns. And, in some cases, people regained more weight than before.

A common belief that grapefruit contains a certain enzyme that helps in burning fat, is not true. In reality, eating any kind of fruit before meals help you reduce weight because it lowers your hunger. And, can curb the overall calories that you consume.

Another common misconception is that many people consider grapefruit as a “negative calorie” food. It means that you can burn more calories by chewing and digesting them. so, when you burn calories more than you have consumed, you will lose weight.

Hence, when you eat a negative calorie food, chances are that you may lose a significant amount of weight. However, the reality is a bit different from what people assume in general. While grapefruit contains a small number of calories, it doesn’t possess a “negative calorie” effect.

3. Grapefruit can sabotage your efforts for weight loss

When you follow a low-calorie diet, it can harm your metabolism. In a study published in 2014, it was stated that people were struggling with low metabolic rates for about a year even after leaving the very low-calorie diet they took for 8 weeks.

4. It may lead to severe nutrient deficiencies

Most of the grapefruit diet variations restrict calorie intake below the standard level that’s considered safe. According to Dietary Guidelines for Americans, the calorie intake for women shouldn’t be less than 1200 and men should take calories above 1500.

According to the FDA, consuming grapefruit or its juice interact with certain medications and can create serious issues. The citrus fruit might interact with anti-anxiety medications, corticosteroids, statin drugs, antihypertensives, antihistamines, and many more. So, if you are using any of these drugs, it is wise to consult your physician before adding grapefruit as a part of your diet.

As with many fad diets, when you follow the grapefruit diet, you may likely experience a weight reduction. However, at the same time, you should keep in mind that it is not a diet that you can follow for an extended period.

Moreover, if you are taking medications where consuming grapefruit is prohibited, you can’t follow this diet system. Instead, you may include grapefruit in your daily diet to derive health benefits.

While certain research has indicated the positive metabolic effects of having grapefruit, no evidence proves grapefruit can help burn belly fat on its own. In short, only a grapefruit diet isn’t full proof and safe process to reduce belly fat.

Are there advantages of the grapefruit diet?

Because grapefruit has minimal calories, it doesn’t add undesirable fat to your body. Moreover, the grapefruit diet consists of vitamin C, minerals, and beta-carotene that help to build immunity. Also, it is rich in antioxidants like pectin and flavonoids. Apart from that, the diet is very easy to follow.

Can you take a grapefruit diet if you are on medications?

The right answer to this question will depend on the exact type of medication that you are taking. Grapefruit oils and extracts can interact with certain prescription drugs. Moreover, it may interact with certain over-the-counter drugs like antihistamines. Another example could be Bupropion (Wellbutrin) that causes an allergic reaction with this fruit.

What is the best kind of grapefruit to eat?

The red ruby ones are the most popular grapefruits that you can eat. They are popular for having a bright red pulp. Also, they are a bit sweeter compared with the other kinds of grapefruits. Moreover, the deep red color indicates that it contains a higher level of antioxidants occurring naturally.

Which food you should avoid during the grapefruit diet?

Here are the foods that you should avoid when you are on the grapefruit diet.

No votes so far! Be the first to rate this post.

We are sorry that this post was not useful for you!

A Comprehensive Guide on Alkaline Diet Plan for Weight Loss

The Truth You Didn’t Know About Alpilean: The Review

ABOUT US
Our objective is to provide you with trusted weight loss information that will lead you to a healthier life.
Contact us: [email protected]
FOLLOW US
© Copyright 2021 - WeightDescent.com
Go to mobile version